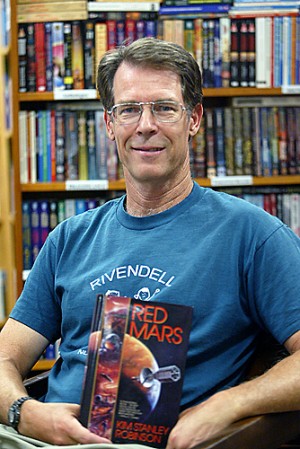 Kim Stanley Robinson (born March 23, 1952) is an American writer of speculative science-fiction. He has published nineteen novels and numerous short stories but is best known for his award-winning Mars trilogy. Many of his novels and stories have ecological, cultural and political themes running through them and often feature scientists as heroes. Robinson has won numerous awards including the Hugo Award for Best Novel, the Nebula Award for Best Novel and the World Fantasy Award. Robinson's work has been labeled by the Atlantic as "the gold-standard of realistic, and highly literary, science-fiction writing".

Retrieved from "https://red-mars.fandom.com/wiki/Kim_Stanley_Robinson?oldid=192"
Community content is available under CC-BY-SA unless otherwise noted.